Well here it is then. My pride and joy.

I have taken so much pride in building this ship, I’m sure Jak is sick to the back teeth of looking at it. At every stage of the build I would say “ Oh my goodness look at this, it’s so authentic, it looks so real” . It was a long wait for this to be released by scalescenes and I was checking the website daily, just so I wouldn’t miss the release.

Along with being a Fire Fighter I work at the local port here at Seaham. So when I found out there was going to be a ship to build, I just had to have it. Although my layout has nowhere to put a ship, I think there might be very soon. One, because I intend to totally start again with my layout and two, scalescenes just happen to do a dockside wall. So I think there has to be a quayside scene.

We have an old sea dog of a Pilot here at Seaham, who brings the ships into the port. I will not disclose just how old he is but, he could have retired seven or eight years ago. But the sea is in his blood and he just can’t let go. When I showed him the plans of the ship, I had to ask him for an authentic name to proudly emblazed on the bow. He came up with the “ IBERIAN TRADER” as this was a vessel that frequented our port in years gone by.

I don’t want to go on about how easy it was to build, because it wasn’t. But i can’t lie to you, I enjoyed every sore fingered moment! To see it grow from the keel to the end result was very satisfying.

Right here it is then, in all its glory, all two foot of it……. 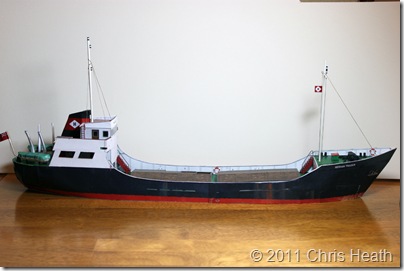 Now a few close up shots…… 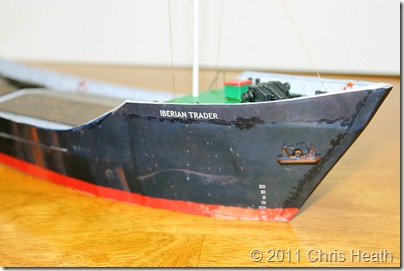 The only parts that are not paper or card believe it or not are, the masts, which are BBQ skewers and a cocktail stick. The chain for the anchor, which is a £1.49 necklace from a local super market painted black.The hand rails on the stairs, a bit of florists wire and drums on the windlass motor, used to haul up the anchor,these were made out of dowel pegs which I turned down to shape with an improvised lathe (my electric drill)…… 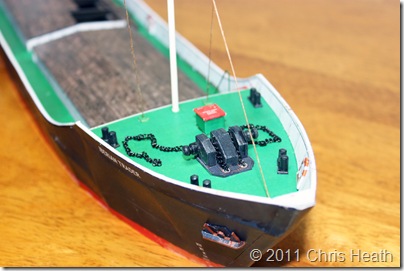 Even the lights are made out of paper….. 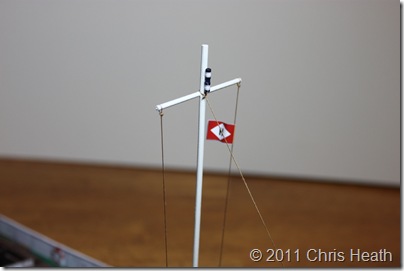 It even has authentic hatch board covers. These I have been told were called “dominoes” by the Merchant Seamen, because they looked like dominoes all lined up……. 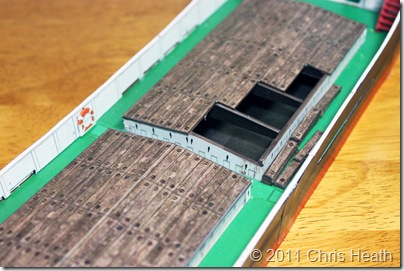 The detail inside the Bridge is brilliant. It has a map desk with it’s navigation maps all laid out.

The Ships wheel and all of the instruments and dials, but unfortunately I have no photo’s and you can’t see in…. 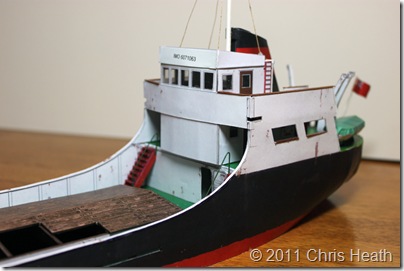 The stern of the ship is so busy, I love it, and yes the life boats lifeboats and davits are card and paper….. 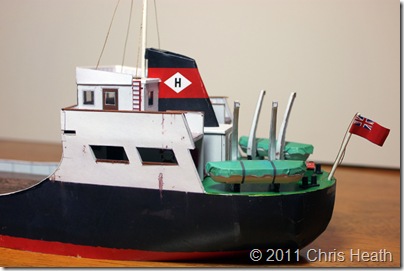 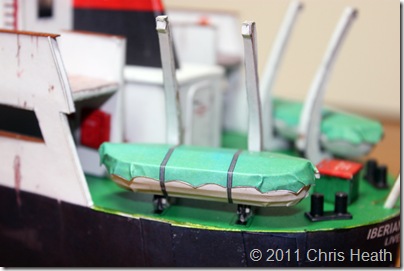 And finally a shot of the Forecastle….. 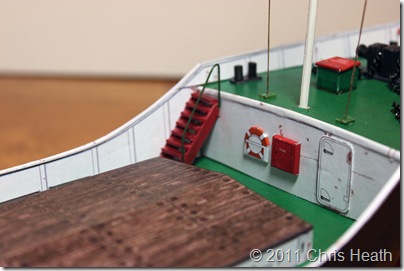 There are a couple of little jobs I have to do to finish it off like handrails and the like, but I just had to show it to you now.

I hope that you have enjoyed these pictures of my previous builds. From now on I intend to try and show you how these models go together and all of the fine detail that is inside, that you never see.

I am also going to pull my layout to bits and totally start again, so you can follow me on my journey of making Wynyard Lane (and dock).

Thank you for the story about the cargo ship Chris. I love how you have even given it an authentic name and really enjoy seeing all your hard work.
Mary

This is stunning, would have loved to see it up close, cannot believe you have used so little else than paper, genius!!!

Another fabulous model - it's lovely seeing what you have made and I look forward to you sharing the making of your future projects so we can see how it all comes together.

I'm not suprised that this is your pride and joy. It is absolutely brilliant! Love all the small details including the 'scuffs and scrapes' along the sides. One day I might get around to showing my doll's houses on my blog, but they're not a patch on your models. Hugs Christine x

i loved it chris and yes so real looking.keep up the good work and give our jak a run for her money.
love joan (ma-inlaw)xx

Wow - this is awesome Chris - I can't believe that its mainly paper and card - just fascinating. It appears that you thoroughly enjoy doing all of this. Much admiration to you!

WOWEE Chris this is excellent...it's unbelievable and to think it's mostly made of paper and card. Like our Jak you must have such a talented brain and so much patience. I'm so looking forward to more of your work. So much talent in one family! Sheesh!

You have some awesome builds there. I've been a fan of Scalescenes too and have built some stuff over the past year or so, but your builds are just fabulous.

check out my builds and my blog Turquoisechill.blogspot.com when you have the time.