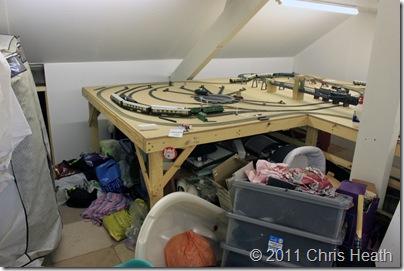 It’s been that long since I have been in the loft, I forgot just how untidy it was. The problem is that everything just gets put in the loft and forgot about. I am as much to blame, if not more so, as anyone because I’ll say “just put it in the loft and I’ll sort it later”. Well later never comes. Natalie our daughter likes to use the loft as a sound studio, as she can set up all her PA equipment and leave it in situ. 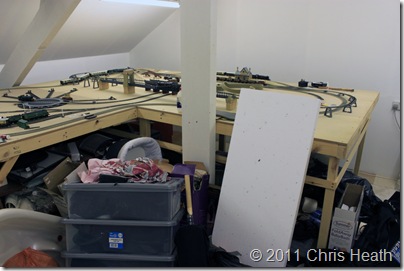 Well I’m afraid it is all going to change. From now on I am reclaiming my domain!!! (Until told otherwise by Jak) The space was first created for Jak as a craft room, but as we can’t fit proper staircase in, we have to just use a loft ladder. This proved too much for Jak, so we converted a bedroom into her craft room when our other Daughter Lauren moved out. This meant that I had the loft all to myself. 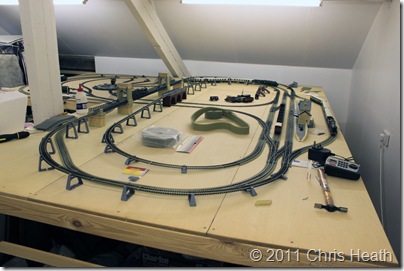 I built a sturdy table, custom made to suit the space and my height so that I don’t have to bend down to work on it. Like in said in a previous post, I filled the space with as much track as possible not once thinking of buildings or scenery. Now that I have found Scalescenes and have become addicted to building the models, I’m afraid all the track is going to have to come up and I’m going to start again.

Well I went up this morning and got set to shifting and cleaning. I have to tell you we could start a branch of Mothercare with all the stuff we have belonging to our Grandson Jack. Luckily enough the table is quite high and I can still store all of it under there.

Two hours later and I have my space back……. 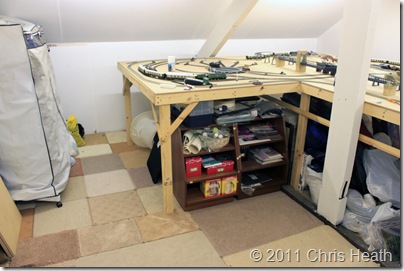 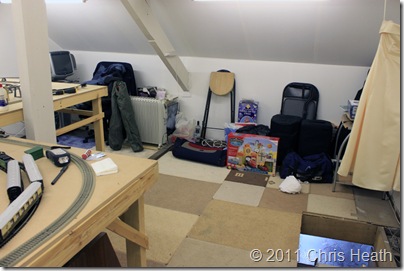 The next step is to lift all of the track and have a blank canvas back. This I hope will be done tomorrow night (Monday). I only have two nights during the week I can work up there Monday and Wednesday, as I have to attend the Fire Station on a Tuesday night for drills, Thursday night I teach the Young Fire Fighters at the station and on Fridays I have to go and have a pint or two (because it is the law). 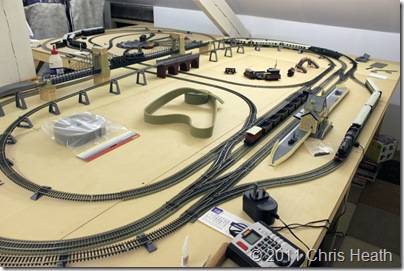 So, hopefully I might have a progress report for you on Wednesday.

Good work Chris. Look forward to seeing how it progresses. Don't think I've seen it since Jak had it and it certainly looks different (except for the flooring - lol!). Not sure about the Friday pints being the law. Guess my OH has broken that one every week since I've known him if that's the case *wink*

Another law abiding citizen ! nicie to see, I do enjoy my friday pints.

What an amazing play space Chris ! Looking forward to seeing it be transformed !

So good to reclaim, right.....hehhhe, looks real good now, cannot wait to see what you going to put as the final outlay for the tracks!! Nice to see you are such a law abiding guy,lol!!!
Enjoy...

Well done managing to do the tidying in 2 hours.Looking forward to the next post Chris.

super idea for a blog, going to show this to my hubby, who I am sure will be following it with great interest, he is now doing similar, selling his old layout and starting a new one up.

Great work Chris...I just wouldn't know where to start in our loft. Can't wait to see have the track progresses.

Blimey Chris you did all that in 2 hours when can you come to do mine? lol
well done cant wait to see the rest of it all neat and tiday.Good luck
Myrax

Chris,
I can't believe you did all that cleaning in two hours!
So glad you tackled that....
Now for the fun.
Can't wait to see what it looks like when you are finished your new track and all you new ideas.
Candy