I think that I'm ready to return to the world of blogging. The reason I have been missing for so long is that I have had a bit of a family crisis of late. At the end of April, after a very short illness, I lost a dear brother very unexpectedly. He was only 53, four years my senior and I miss him dearly. The thought of sitting at my craft table and making models was he last thing on my mind. Not to mention sitting at a computer and blogging about it. However, they say that the sooner that you try and get back to normal the better. So here we go again.
In my last post told you that I was making the 1930's semi detached houses from scalescenes. Well since the passing of my brother I'm afraid that it has been left in limbo a little bit. It's about three quarters done, so I need to take some pictures and get them posted. I will try and get myself motivated tomorrow to take these pictures. It sounds like I've been vegetating in a darkend room, but his is not the case. Myself and my wife Jak, have taken up cycling and it has helped me immensely,
getting out in the fresh air and just going where ever the moment takes us. Plus I've managed to lose 56 pounds (25.5kg) which isn't a bad thing! Today I went for a ride to the beautiful city of Durham. A round trip of around forty miles. The weather was absolutely beautiful and when I reached Durham there were several street brass ensembles playing away merrily. They entertaining the crowds with a range of witty and traditional tunes. I could of stopped and listened all day, but I was on a mission to achieve forty miles, so away I went. 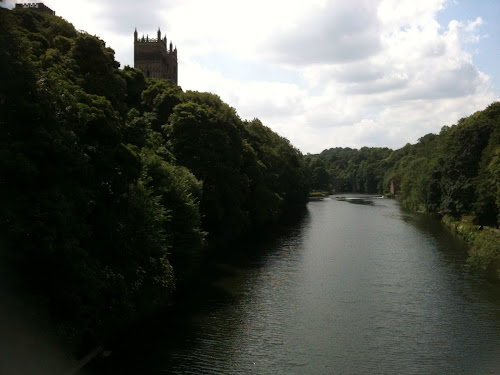 This was the view from one of the bridges that cross the river wear at Durham. 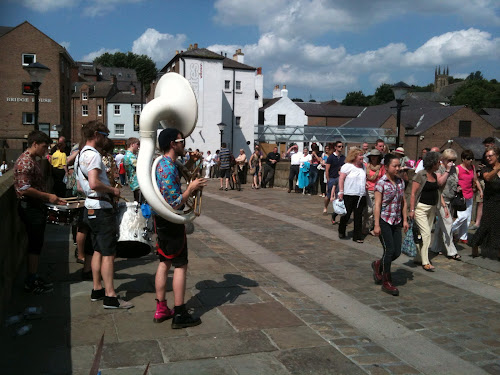 And this was a quick picture I took of one of the bands.
Forgive the layout in this post, it's all over the place but I'm writing it on my new fangled iPad, and I don't quite know what I'm doing yet.
Right, I promise to get my butt into gear tomorrow and get normal service resumed.
Until Next Time..........

Posted with Blogsy
Posted by Chris Heath at 22:20

just going to the city of Durham would help anyone immensely without the bike ride getting there. You are both doing so well.
Chin up chuck.

beautiful pics and well done on the weight loss x

Nice to see you back Chris, can't wait to see those photos! xx

It's nice to see you back again Chris. Fantastic weight loss and i've been following Jak's updates on your bike rides. 2 lovely pictures Chris and looking forward to seeing the 1930's semi detached houses update as and when you feel up to blogging again.