This was the most challenging build I had undertaken at this stage. It was quite a lot bigger than anything I had previously built. But it was not as hard as I first thought, as most of the church was built in smaller sections which then later joined together. Once again the interior detail is incredible, but on this build I managed to build the roof so that you can lift it off the church to see inside.

As you can see it even has roof trusses….. 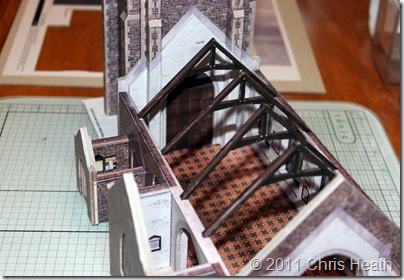 It’s hard to believe these models are built out of card no thicker than a cereal box. John Wiffen the designer at scalescenes leaves no stone unturned when it comes to detail, you can even read which Hymn they will be singing. The windows are printed onto acetate and are so finely detailed, they just had to have light shinning through. 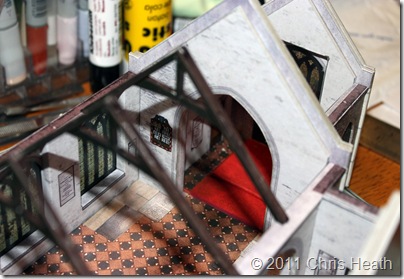 My work space, as kindly donated by Jak, along with a lot of her craft tools. Those Promarkers come in so handy for colouring in raw edges. (Don’t tell her, She will kill me). You can see behind the church, the downloaded sheets which are then mounted onto the card ready to be cut out. I personally printout my sheets onto A4 address labels as I find it makes so easy to fix the sheets to the cards that way. I find I get a lot of air bubbles with glue and a glue stick is just too fiddly.There is no fancy di-cut with these models and I’m afraid to say, I have cutter-outs finger! 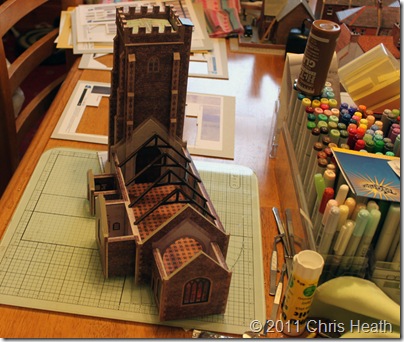 Once again I could not resist wiring the church up and adding some light to the interior. 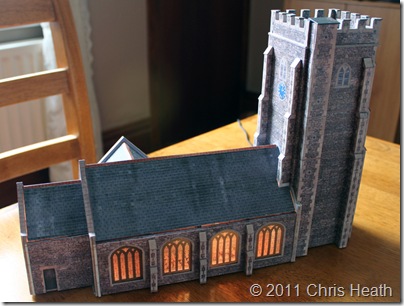 One last one to show you, and that is of the detail on the outside as well. 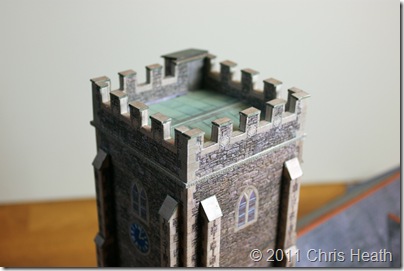 Right that’s it for this build. I’m getting excited now, because I have only one more build to show you, which is a Large Station Building, then I can show you my last project that I have finished, which was a Cargo Ship . You don’t want to miss that one.

WAUW this is so amazing work. Really stunning, that´s for sure. I´m really impressed by all the tíny details onhere and nothing is forgotten, but all is just here. Really forgeous work, WAUW. Thanks so much for sharing this with all of us here.

I remember seeing this when Jak shared the pictures a wee while ago, but great to see them again. Looking forward to seeing your Cargo ship.

WOW, so stunning, one forgets they are miniatures till the pic next to the copic's, amazing work and detail, love it!!!
lotsa luv

This is stunning and I love how you can lift the roof off to peek inside, great for access too. Hugs Christine x

What you do is amazing Chris, it is so nice to see the work in progress. The church looks so inviting when lit, I would imagine it will look stunning when it's all arranged as a street at night with the windows all lit up! Well done on such a fantastic effort. One thing I would like to know is... how on earth do you keep your desk soooooo tidy???